I suggest playing the Rains of Castamere while reading this post

What possible sources of inspiration within medieval history did George R Martin base the infamous red wedding on? How do they draw on these inspirations and how do they deviate from them?

George R. R. Martin most famous book series, Game of Thrones never disappoints it seems, it has become a phenomenon on paper and now a phenomenon on the screen. Martin’s words translated from the pages to TV have created a huge following for the series. One of the things that makes the books and the show so popular is the big shocks, and the mimicking of real life that they bring to it. One of the largest events that shocked the fans of this series was the famous red wedding event. Martin wrote the book that contained the red wedding a Storm of Swords in 2000 and the episode with the wedding aired June 2, 2013 in the Rains of Castamere 1

The red wedding was traumatic event first for the book readers then for the show watchers. For the purposes of this essay I will be discussing the TV show scene in more depth. The book readers knew this scene was coming it was inevitable the episode title itself has an eerie ring to it. The episodes last scene from episode nine is the scene from the Twins castle of House Frey it seems pleasant at first to someone having not read the books but got bad really fast.

Robb’s army has arrived at Walder Frey’s castle, knowing that the King of the North betrayed him by marrying Talisa.  Robb’s intent for going to the twins was to attend Edmure’s wedding who becomes a proxy to marrying Frey’s daughter or granddaughter when Robb married Talisa. The Wedding was grand; Frey offered great hospitality to the Stark army, we see a grand feast at the end.

This grand event was short lived though. As the feast was winding down, the hall doors were shut by Frey’s men and Caitlyn stark immediately knew something was very wrong. Along with the doors shutting the Rains of Castamere start playing from the band players above the hall.  The Rains of Castamere famous because it was the song “commemorating House Lannister’s decisive and brutal victory against the rebellious House Reyne of Castamere years ago” 3

. Caitlyn sees as well Roose Bolton wearing armour under his clothing and she knows this is going bad. She then proceeds to warn Robb which is when chaos ensues.

Suddenly Talisa is stabbed numerous times in her belly, Robb is shot by a number of arrows by the now bow and arrow holding band members and the men of the Stark army are shot dead. Caitlyn takes cover under a table and Robb is holding his wife as she dies. Caitlyn spots Frey’s wife hiding under another table and grabs and knife and takes his wife hostage. She pleads that Frey realise Robb and take Caitlyn as prisoner and “all will be forgotten” 4 . Robb still stunned by the death of this wife is still with his dead wife and unborn child in his hands. Caitlyn then threatens Frey to kill his wife unless he releases Robb, Frey looking at her says “I’ll find another” 5 . Bolton then walks to Robb and says with vengeance “the Lannister’s send their regards” one of the most famous lines from the whole series.

Bolton kills Robb and Caitlyn screams with anguish then continues to cut the throat of Frey’s wife and stands in shock and sadness. Then a Frey guard then cuts the throat of Caitlyn Stark thus ending the Red wedding.

After the Red wedding aired Martin talked to entertainment weekly and told them the historical roots to the event in his books.

“The Red Wedding is based on a couple real events from Scottish history. One was a case called The Black Dinner. The king of Scotland was fighting the Black Douglas clan. He reached out to make peace. He offered the young Earl of Douglas safe passage. He came to Edinburgh Castle and had a great feast. Then at the end of the feast, [the king’s men] started pounding on a single drum. They brought out a covered plate and put it in front of the Earl and revealed it was the head of a black boar — the symbol of death. And as soon as he saw it, he knew what it meant. They dragged them out and put them to death in the courtyard. The larger instance was the Glencoe Massacre. Clan MacDonald stayed with the Campbell clan overnight and the laws of hospitality supposedly applied. But the Campbell’s arose and started butchering every MacDonald they could get their hands on. No matter how much I make up, there’s stuff in history that’s just as bad, or worse.” 6

The Black dinner was a famous Scottish events that happened in the 1400s that got rid of a famous and powerful family just as the Red wedding. The black dinner started out with James I who was having a trouble controlling the nobles around him. He died suspiciously in 1437 when his very young son took the throne. James II was still very young to make decision for the throne so the regents were governing at the time. The Earl of Douglas, Archibald Douglas helped the young king govern but when he died after the plague there were two nobles that started running the show: Sir William Crichton and Sir Alexander Livingston. William Douglas the son of the Earl became good friends with the young king at 15. King James looked up to William a great deal, the two nobles: Crichton and Livingston grew jealous and threatened of this relationship. Both the nobles joined forces and wanted be rid of the Douglas’s to reinforce their own power again.  The two nobles invited William Douglas and his brother at Edinburgh Castle on November 24, 1440 7 . The brothers were treated like with great etiquette and had a great feast. After the feast a bagpipe started to play and by some accounts as well war music.  Soldiers then blocked the doors of the all, a giant bulls head was placed in front of the two brothers which Is a Scottish symbol of death and the two were charged with treason and executed.

As you can see by just this historical summary of this event there are many similarities to the Red wedding. The relationship to the king and the earl can be compared somewhat to Caitlyn stark and Walder Frey as they did have history before Ned died and when she was a Tully. Another similarity would be the invitation for the feast in history is similar to the invitation Walder Frey gives Robb for a grand feast. The overt accommodation of both stories is told by the Crichton and Livingston’s on one hand and Frey on the other. As the biggest similarity would be when the drums and the war music started to play in the Edinburg castle as the Rains of Castamere started playing in the Twins hall.  Another similarity would be the notable moment in the Douglas’s death were that the hall doors were closed and as we can see in red wedding there is scene where it is showed that the doors to the hall at the Twins are closed as well. Then where the story starts to differ would be when in the Edinburgh castle the servants bring out a giant bull head and then Crichton and Livingston accuse the Douglas of treason and the lead them outside and execute them. In the red wedding chaos ensues where the war music begins and the Starks army and Starks themselves are killed. This shows that Martin very much based the Black dinner of 1440 on the red wedding in Game of Thrones.

The Massacre of Glencoe

The Massacre of Glencoe is another historical event based on the red wedding. This event started after the Jacobite uprising when the King wanted the highland clans to swear their allegiance to his before New Year’s Day. Alasdair Mac Iain, the Chief of Glencoe arrived to make his oath on New Year’s Eve but was told he would have to travel 70 more miles and ended up arriving on January 6 to take is his to the king 8 . The chief was promised that his oath would still stand and he and his people –the McDonalds of Glencoe – would be kept safe. Then on February 2 about 120 troops arrived to the village of Glencoe and were greeted by the people of the village 9 . The army was wined and dined with great appreciation. The army stayed in the village for 10 days where they were treated with great hospitality until order were received to the troops

“You are hereby ordered to fall upon the rebels, the McDonalds of Glencoe, and put all to the sword under seventy. You are to have a special care that the old Fox and his sons do upon no account escape your hands, you are to secure all the avenues that no man escape” 10

The morning of February 13 the attack begin the soldiers killed Alasdair Mac Iain in his bed and the whole village was set afire 11 . In the Glencoe massacre 38 men women and children were killed by the soldiers. 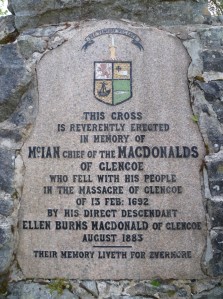 This historical event compares to the Red wedding by the basis of betrayal mostly. In the red wedding the Starks trusted the Freys of their safety as well as the troops coming to Glencoe. But both groups were betrayed by what they thought were trusted groups. The result was a massacre on both ends and both groups were made examples of to the public. The Glencoe massacre was turned into an example from the king that if anyone else were to rebel they would be killed. As well in the red wedding the Lannister’s sent a message through the Frey’s that if any army is to rise against them they were kill all of them.

In both of these historical events there was an unspoken truce against both events that made the Douglas trust the people in the Edinburgh castle and made the people of Glencoe trust the solider in their presence and that was the Hospitality Laws. The hospitality law was “A host and guest were not allowed to harm each other even if they were enemies. By violating that law, the phrase is, they “condemn themselves for all time.” 12 . Martin mimics this in the Game of Thrones in the world of ice and fire it is called the “the guest right which dictate that any guest who has eaten bread and salt in their host’s home is not allowed to be harmed.” 13 . This is another huge a parallel to the real world.

In conclusion Martin at its most basic sense took both of these historical events combined them together and created the red wedding. He took the highly influencing family the feasting, the war music and the eventual deaths from the Black dinner and added the large army and the betrayal from the Glencoe massacre to create this iconic scene. from both events he took the understand of the hospitality law and created an event that no one will ever forgot in the Game of Thrones world or the people watch and reading it would. Martin did an impeccable job in putting these historical events together and creating a master piece with it.

Martin, George R. R., and Elio Garcia. The World of Ice & Fire: The Untold History of Westeros and the Game of Thrones.

Reporter, Daily. “How Shockingly Gory Game of Thrones Episode Was Based on Real Events in Scottish History including the Black Dinner Bloodbath of 1440.” Mail Online. June 6, 2013. Accessed June 15, 2015.